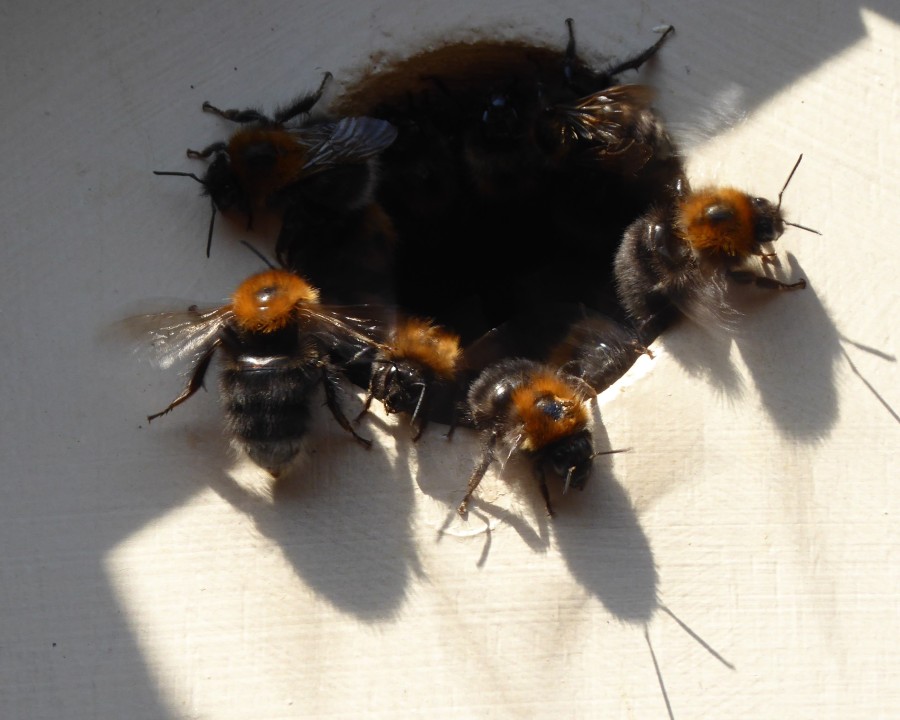 Each morning as I walk towards my garden shed, I am greeted by the energetic buzzing of my tree bees which, for the second year running, have chosen one of my bird boxes as a venue for their colony.  I first became aware of them when I heard what sounded like an engine coming from the nest entrance.  Curious, I looked closer, and could see several bees on the edge of the doorway fanning their wings at super-high speed to keep the colony cool and ventilated.  Now accustomed to their bee-like ways I have come to love my family of bombus hypnorum; a tree bee that is relatively new to the UK.

These adaptable, successful bumblebees have a wide distribution from the mainland of Europe, Asia and into the Arctic Circle.  They were first recorded in Wiltshire in 2001 and now commonly occur in England and much of Wales.  They generally prefer the edge of woodlands, so I feel very honoured that my flower abundant wildlife garden has once again brought them here. When I see them hovering over my flowers, I feel quite smug to know that they are ‘one of mine’.

They are a pretty little bee with foxy coloured thoraxes, black abdomens, four fine laced wings and white downy tails.  Their strange alien faces look back at me with five big round compound eyes.  Two on their face and three on top of their heads.  The ones on their face are slightly hairy so that they can detect wind direction.  All in all, bees are perfectly engineered mortals that ensure the survival of 70% of the world’s crops, and at last we have learned to revere them.

Somehow having a bees nest in my wildlife garden makes it feel complete. I love the comings and goings and the fascination of seeing them come out on their ‘nest surveillance’ flights (a technical term for a bee cloud hovering around the entrance).  These flights of fancy dancing are actually a mating ritual. The workers busy themselves all day, gathering nectar until dusk, before heading home to their colony for the night.   Sometimes, on hot sultry nights I can hear their feint buzzing as the on-duty workers fan the nest.

They will stay here until late July after which the colony will die out leaving the queen bees to hibernate until next February or March when they will search for a new site; hopefully here in my garden. The queen bees are already emerging, heralding the beginning of the next generation.