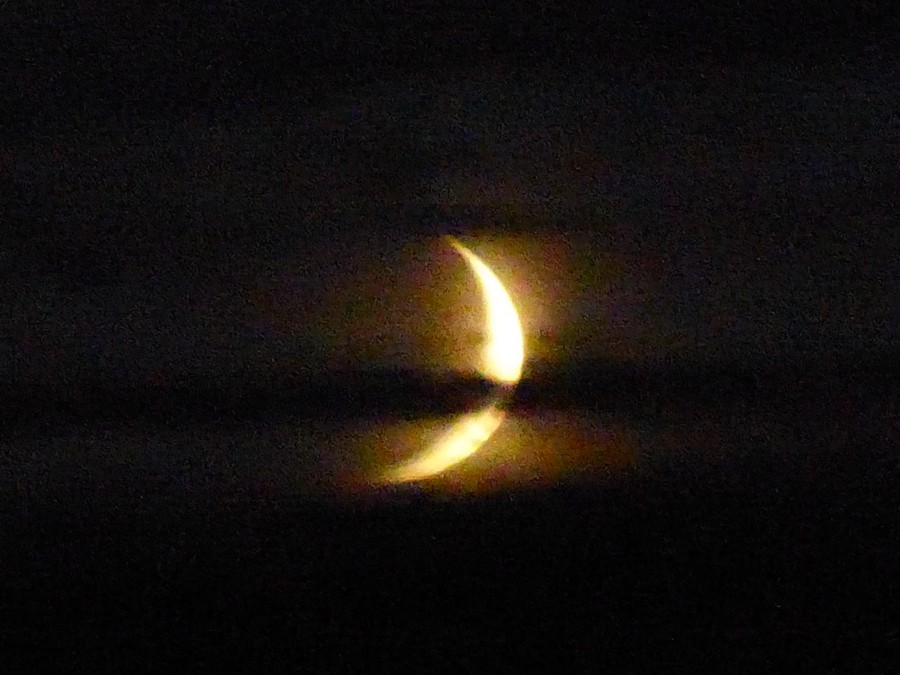 By the time I near the end of my blustery walk on the Dorset coast, it is an hour or two into the winter darkness. The skies are semi-veiled with cloud and the air is heavy with damp and cold.  Despite a sudden desire to be home in the warm, I find a suitable place to sit and watch the setting crescent moon.

Luck is on my side as the clouds begin to depart.  It is worth suffering the biting cold to behold this bright yellow arc of a waxing moon hovering over the Western ocean. This elegant crescent is the first of the moon’s eight phases. With my binoculars I can easily make out the scrapes and hollows of the craters along its inner curve, and then the fine rim of its circumference.  Because it is so low tonight, it looks larger than usual but this is just an optical illusion.

For this brief moment in time, I am transfixed by the sound of the waves crashing against the cliffs below me and the bracing night air on my face, as I watch the Earth’s natural satellite dip out of view below the horizon. It is a reminder that we earthlings are so small and immaterial in the enormity of the universe.

Of all the celestial wonders, I find the moon the most captivating, perhaps because of its ever-present, ever-changing shapes and colours. Its prevalence in folklore and mythology, art and literature is a testament to its influence over us.  Indeed there is much written about how the gravitational pull of our moon not only affects the water on our planet but also our own moods, behaviours and ability to sleep. There is, however, only limited scientific evidence to suggest this is true. But the moon’s utter wonder and magnificence is enough for me to spend hours watching its brilliant beacon of reflected sunlight.

As I watch the tip of the crescent disappear from view, I gather my rucksack and head towards my car.  As I do so, I contemplate the theories of the moon’s origin. My favourite is that the infant Earth and a planet called Theia collided, melted and reformed, with a small part of the newly formed mass spinning off to become our sister satellite, bound together forever by gravity. But one thing is for sure, without its steadying presence, life on earth would be less agreeable.