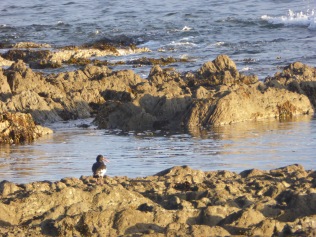 As much as I love living in Dorset, my natural inclination is always to head South West towards home.  I know every mile of the coast path between Dartmouth and Fowey; where the best cliffs, caves or rock pools are.  I could take you to see pipe fish (related to seahorses), cushion stars, jewel anemones, squat lobsters,  star ascidian and stunning little blue rayed limpets.  But most of all I know where the best shell beaches are.

There is one spot in particular where I love to visit.  It is a place where my soul lingers long after I have left and where I can still see the shadows of my two little boys roaming over the rocks in this beautiful watery wonderland.  The story began with my own childhood and my very first cowrie shells.  The first was discovered at Readymoney Cove in Fowey and the second was at Sennen Cove, near Lands End. Thereafter my eyes could pick them out easily despite their small size.  I learned how they decorated the tide lines, where they lingered under seaweed and how the two brilliant white rims would stand out against the sand below if you looked very carefully.

You can find two species of cowrie in British waters. The first is the European cowrie (Trivia monacha) and the second is the Common cowrie (Trivia arctica).  Their range is from the Mediterranean Sea to the Shetland Archipelago in the North Sea.  I have only ever seen one alive and that was whilst I was kayaking in the rocky entrance to a sea cave near Boscastle, North Cornwall.  However I have found thousands of their shells swept ashore on the Devon coast.  I don’t know why cowrie shells are so fascinating but maybe it is because of the connotations with wealth and power, as the cowrie has been used as an instrument of payment in many countries in Africa and south-east Asia,

From my childhood fascination, the search for the often elusive cowrie became a family ‘thing’ that was utterly embraced once we had discovered our very own cowrie beach.  Whole summers were spent here wandering the tidelines and caressing the sand to uncover not just the cowries but all the other colourful shells as well; soaking up all the joys of whiling away the hours by the seashore.  Summers were followed by autumn, winter and spring rambles despite the treacherous slippery scramble over the rocks or down the cliffs to get there.

The remnants of these collections now decorate my house in demijohns and glass jars….little pots of golden memories: of boys, buckets, crabs, starfish, picnics, incoming tides and evening sunsets.  This little beach calls me back and back again.  It is a ‘heart place’ where I stroll along its many tidelines, dance over the rocks or lie on my back and watch the peregrines , kestrels and rock pipits who add drama to the shale cliffs.  The snorkelling is an adventure down the rocky ravines revealing underwater gardens that lay hidden beneath the waves.  It is a place that listens to me, that connects with all my needs; a place I truly love.