It was the week between Christmas and New Year and I knew that the starling murmurations on the Somerset Levels were in full glory.

I have been a regular visitor of this winter event for over ten years and each time is a surprise. Increasingly large numbers of people come to await the dusk and drama.  The truth is you never quite know where the starlings are going to roost, sometimes they can swirl all around you, and other times they fly past and beyond, grouping and ungrouping in their astonishing shapes and patterns; a collective psyche made up of up to 100,000 birds.  It is amazing and mysterious behaviour which never fails to excite the onlooker.

This time I wanted to make a whole day of my visit and packed my kit bag to head off for RSPB Ham Wall and its neighbour Shapwick Heath; two reserves among several on the Avalon Marshes that is home to so many wetland species. The levels have a strange, ancient atmosphere, big skies, long dykes filled with water, reed beds and shady, watery woods. Glastonbury Tor can be seen hovering above the levels.  It is not the prettiest of places but it is bursting with life. Sixty species of birds nest here and it is a famous haunt of our beguiling but furtive otter.

There is a small intimate hide which is a favourite of mine. It overlooks a magical waterscape which draws the eye from the woodland and reed beds in the distance all the way towards the shallow but vegetated water in the foreground.  It was here where I saw my first Great White Egret and the nearest place where I can hear and see bittern; two stunning but elusive birds.

But first, I took the trail from the car park along a secret, meandering walkway through the reeds. On a shady bend I stood still for a moment and took in the sweet and distinct peaty smell of the earth and water.  Here my binoculars fell upon a pair of over-wintering Chiffchaffs; surprising for late December. As I watched their gymnastic moves around the low twigs of a sleeping willow, I caught sight of another secretive little bird: a Cetti’s warbler…. 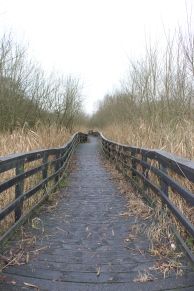 I held my breath as this beautiful bird searched the bare scrub for bounty. This was a first for me; a special moment which marked this extraordinary day. Whilst the marshes are frequented by several Cetti’s with their loud and slightly grumpy warble, they are incredibly difficult to see as they skulk between the leaves of thick waterside vegetation. But today he was in full view, in winter plumage; similar to an oversized wren with his cheeky tail cocked up high.  I watched him for a good five minutes before he headed into the thicket, then listened as he bade me farewell. Another intimate and memorable moment in nature.

I wandered on to enjoy the day which including a boisterous flock of Lapwing, countless Widgeon, Teal, Little Egrets, Grey Herons, Great Crested Grebes, Dabchicks, Coots, Moorhens, a motionless Great White Egret, a female Marsh Harrier, Long tailed tits, Coal tits and the prettiest Goldcrests in pristine plumage. All this followed by a fly past of roosting starlings. British wildlife is truly wonderful.