Today we travel from Medan to Bukit Lawang which is a village situated on the banks of the Bohorok river and on the edge of the Unesco world heritage listed Gerung Leuser National Park. Lonely Planet describe the park as one of the world’s most important and biologically diverse conservation areas; often described as a complete ecosystem laboratory because of the range of forest and species types. Indeed, some of the most endangered charismatic species on earth live here: tigers, elephants, rhinos and orangutans. Sadly only a proportion of the 7,927 km² is given over to conservation and afforded adequate protection. Plantations push deep into the frontiers of the diminishing forest and large portions of habitat are now fragmenting. That and poaching pose the greatest threats to its survival.  Northern Sumatra has mostly slipped under the tourist radar, however Bukit Lawang is a major tourist hotspot.

It was an early morning start from Medan and a three hour drive through this rather depressing sprawling city. Curiously the spread of humanity followed one continuous line along the roadside and the city seamlessly became village which then stretched all the way to Bukit Lawang.  Roads in Sumatra are like major arteries along which humanity sprawls from one location to the other. At this edge resides whole families, their chickens, their children and their cats and dogs; all coexisting amongst the motorcyles, bikes, cars, lorries, trucks and other random makeshift vehicles. Unfettered by mobile phones and ipads smiling children play simple games beside the road.  Behind the colourful and charming bungalows, there are rubber plantations, coconut palms and enormous expanses of palm oil.

Eventually after an uncomfortable and bumpy ride, the taxi stopped by the riverside and we paid up and disembarked across a moving rope and timber swing bridge. I could smell the sweet sense of the rainforest and felt the wildlife adventure beginning.  We checked in the Ecolodge and immediately arranged for a guide to take us into the rainforest.  We put on our forest clothing covering as much flesh as is possible and equipped with binoculars and cameras, we climbed up beyond the village and into the hills. Orangutan had been spotted not far off the trail; we scrambled through the tree-roots and inclines to see them.  A mother and her baby are playing and lolloping in the canopy.  The baby cheekily practicing its swinging technique whilst its mother nonchalantly looking on.

The guide was concerned that we were not getting good photographs and asked if we would like him to entice them with a banana so we could get closer views. We were slightly astonished to witness this blatant food provisioning which is a highly questionable practice but one we were expecting as it is particularly common here in Bukit Lawang.  We politely refused his offer and were content with the odd clumps of russet fur that could be glimpsed through the canopy, and the very occasional glimpse of their faces peering down at us.

Our walk continued past a few very old trees, some standing and others that had uprooted and crashed to the forest floor to become part of the new understory. There was some discussion whether this was primary or secondary forest culminating in the decision that this had been logged at some point during the 1970s given only the occasional very large tree. The rest of the forest was relatively young (trees gain height quickly; it is their girth that determines their age).  We were lead along well-trodden trails where we saw another three orangutan; another mother and baby, and a juvenile.  There were also Thomas’s Langur monkeys which only occur in Sumatra, Silver-leaf monkey, and Pig tailed and long-tailed macaques.  To see five primate species in such a small geographical area is a joy to behold but sadly shows how habituated they had become. There were pungent smells of primate urine which gave their presence away.

Looking back at this experience now, it is obvious that the Bukit Lawang is very touristic and contrived. At the time, however, it was easy to submerge ourselves in the moment and just enjoy it. Nevertheless we had to conceive that the primates stayed close to the tourist trails as they had learned that this was where they could acquire a free meal.

There were, of course, other things to see, not least the birds and forest insects. Discarded fruit attracted the most wonderful and exotic butterflies and it was mesmerizing to watch as their colourful wings caught the light between the forest floor and the canopy.  We all really enjoyed this first forest experience and thanked our guide after booking a dawn walk the following morning.

After a shower and a quick snack we walked across one of the many rope bridges that cross the river from the tourist accommodation into the village to explore the development that lines the river. The local villagers were surprisingly warm and welcoming although the path we followed felt rather intrusive.  There was no bullying or hawking. Intead we encountered people who were keen to chat; one of whom was a very gentle restaurant owner who had not only lost her business in the 2004 floods where the resort was obliterated and several people lost their lives but also due to fire; this was now her third attempt at making a living from her small riverside restaurant.  She explained how tourism has actually decreased quite a lot in the last few years and that the resort was sensitive to the impact of the European school holidays, recessions and terrorist threats; a clear reminder of the inter-relationships of far torn places and people in the tourist industry that have serious repercussions for local people dependent on tourism.  We walked back to our lodge after watching the sun go down over the forest, bathed in the cold shower and made for bed under our mosquito nets.  It had been a good day.

For more information about this LEAP (Landscape, Ecology and Primatology) project visit:  http://go-leap.wix.com/home 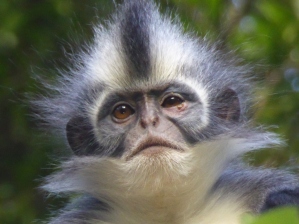 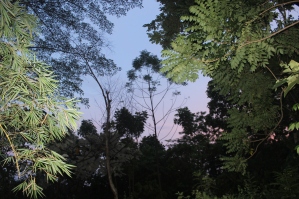