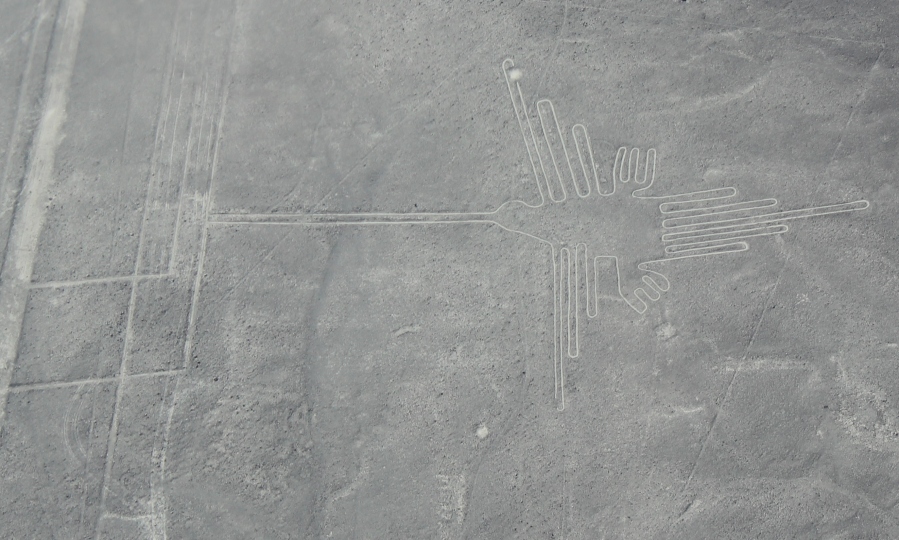 After another long bus ride I am sitting in a café in the hot, dusty desert town of Nazca.  It is mid-late afternoon.  There are flowering acacia trees, Latin music blasting from every corner of the plaza, political banners and demonstrations, car horns and hundreds of people enjoying their Saturday.  This is what I love about South America: the life and the vitality of its people.

The birds to be seen in town include swallows, martins, finches, doves, pigeons, vultures, a pair of hummingbirds feeding from the Acacia and a curious nighthawk, the likes of which I had not seen before but a flight not dissimilar to a night jar.  I sit and recall my working week and these last two days whilst sipping coffee and watching the world go by.

I pick up my camera and explore the town taking photos of the colour and culture around me.  Eventually it is time to watch the sun dip beyond the horizon and to get some supper and get some sleep as tomorrow I will take an early morning flight over the Nazca lines.  The Nazca lines have captured my imagination since childhood and so I could not give up an opportunity to see them.  Intriguingly the town’s identity is entirely based upon these mysterious drawings.

After a sound night’s sleep, I get to the airfield for 7.30am and with five other people  board the light aircraft which will fly us over the desert’s secrets.  It is some years since I used to fly with my brother in a light aircraft; the loudness of the engine and the rapid ascent are very familiar and brought back some lovely memories of Saturdays spent at the airfield.  Once in the air, it is not long before we begin to see the lines.  The precision and mathematics with which they were created is astonishing and can only be appreciated from the air. 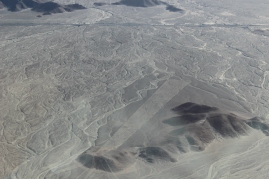 The lines are a series of ancient geoglyphs  which are designated as a UNESCO World heritage site.  They are situated on a high, arid plateau which stretches between the two towns of Nazca and Palpa approximately 400 kilometres south of Lima.  The lines cover more than 80 km between these two towns.  No one knows how old they or how they came to be here but it is widely believed that they date from 500 years BC and were created by the ancient Nazcans.

The lines have been made by removing the reddish pebbles on top to uncover the whitish/greyish ground underneath. Hundreds are simple lines or geometric shapes but more than 70 are stylised designs of animals such as birds, fish, llamas, jaguars, monkeys, whales, sharks, lizards or human figures. Other designs include trees and flowers. The largest figures are over 200m across and can only be seen from the air.  The climate here is dry, windless and relatively stable (apart from during El Nino) and this has preserved them well. 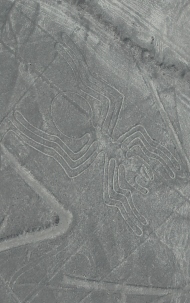 As the plane twists and banks sharply we get clear views of the desert beneath us.  The girl beside me gets increasing sick as the plane follows an intricate flight path.  Fortunately I am too excited and moved to feel ill, and as I watch the shapes beneath me I wonder of the people who created them and how much they identified with the animals and plants they depicted.  They upheld them as religious symbols; god-like creatures to be worshipped and adored. How far humanity has come away from this ancient relationship between us and our fellow creatures.

The last mystery are the strange circular wells (known as the Cantalloc Aqueduct) that allowed people to reach the manmade underground channels of water. This allowed the ancient Nazcans to withstand the arid desert.  They are apparently still in use today, 2000 years later.

We finally come to land and I thank the pilots and make my way back to Nazca for breakfast and to pack ready for my eight hour bus journey back to Lima and my flight home the next day.  How easy it is to travel and how much there is to see.