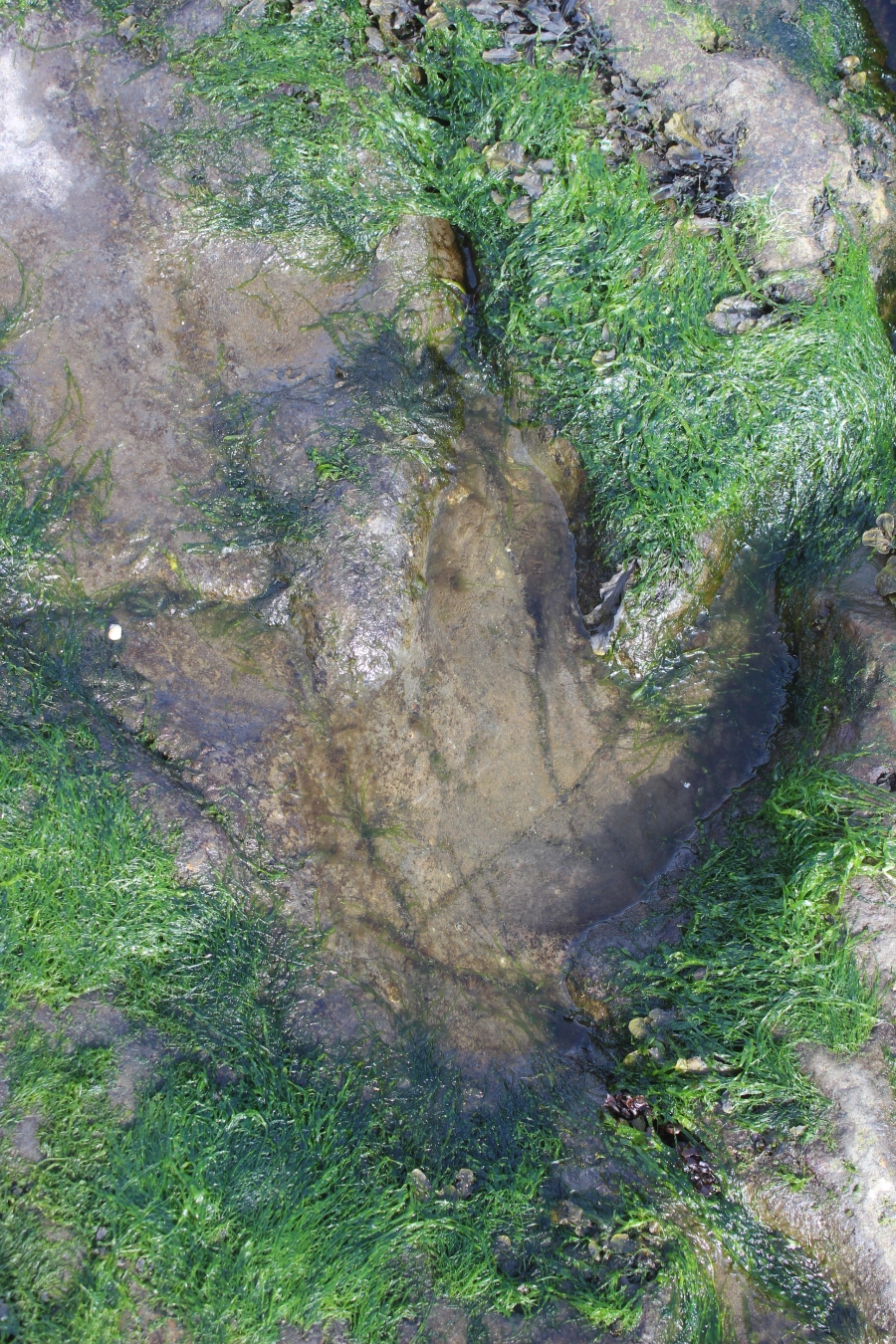 As soon as I heard about a new discovery of dinosaur tracks on the Isle of Skye, I felt a surge of excitement. Scientists had unearthed a site where meat-eating sauropods and theropods once roamed.  They had left their footprints on the soft lagoon mud 170 million years ago when the island was part of Pangea.  It was such an awe-inspiring thought that I could walk in the footprints of dinosaurs and where better to do this than our very own Isle of Skye; the land of mystical clouds and otherworldliness.

My dinosaur adventure began, rather strangely, in Skye Batiks, a colourful touristy shop in Portree whose multicoloured shop window involuntarily drew me in.  Gavin, the shop owner, offered me some fresh coffee and whilst sipping this welcome drink I told him about my day wildlife watching with Andy, the local wildlife guide.  “What’s next on the itinerary?” he asked.  “Dinosaur prints would be nice if I can find them.” I said.  He smiled, how many times had he heard that, I wondered? “I think you need to meet Dugald in the Staffin Museum.  He’ll most probably show you them if he knows how interested you are”.  Dora, a friend of his rushed over to join in the conversation, proudly showing me her photographs of the dinosaur tracks she had found at Duntulm.  I stared admiringly at them desperately trying to make them out.

Early the next morning I left the clouds and shadows of the Cuillin mountains to drive up beyond Portree to the Trotternish peninsula.  As I drove past the Old Man of Storr with its strange ‘pinnacled’ landscape, jagged peaks and bare ridges, it looked like a scene from a lost world.  I could easily imagine dinosaurs roaming its valleys.

Just beyond Staffin, I spotted the small crofter’s cottage that housed the island’s museum and there, talking to some tourists, was Dugald, the local palaeontologist.  He was a friendly, enthusiastic curator who captivated me with his stories of discovery and the dinosaur footprints he kept as exhibits.  He explained that “significant finds have been uncovered every year since 1994” and that there are probably thousands of tracks which, by chance, sit on top of the visible geological plates leaving many more prints buried in the strata.

I listened carefully as he told me to look “for the bedrock under the grassy bank at Brother’s Point; you are sure to find them there. “And also,” he added, “at Staffin Beach, and at low tide at Duntulm, a little further up, to the west of the peninsula”.  Furnished with this precious information. I hurriedly set off to catch the low tide as prints are often covered by the sea.

Brother’s Point was my first stop but it was not at all easy to find.  Only a small faded wooden signpost at the side of the main road pointed to a steep, grassy track.  This led me past the ruined crofters’ cottages that time and the clearances had lain desolate until it levelled out to a wide sweeping bay with rocky outcrops.  Balancing precariously over the round boulder-strewn shoreline, I was greeted by two common seals who frolicked in the water, sky bopping to keep an eye on me.

Once on the bedrock now uncovered by the tide, walking was much easier and I fixated on finding either a deep impression the size of a dinosaur foot or better still, a cast created when the stone around it weathered away. Because I wanted to see them so badly, every hollow in the rock seemed to morph into the distinctive three toed shapes I was looking for.  Three American girls asked me if I knew where they were.  “No, I replied, but I am sure they are here somewhere”.

We ganged together, an odd little group of visitors, who asked every person we could find on this strangely busy stretch “do you know where the tracks are?”.  Eventually a couple took us to a deep impression created by a sauropod; a creature much like a brontosaurus whose print is large, round and disk-like with three toes on the top.  We took lots of photographs and the girls strolled off happy that they could now tick dinosaur prints as ‘found’.  But I wanted more.

From here I travelled to Staffin beach to seek the trails there.  Eyes to the ground, I eventually found, edged in fine seaweed, the perfect print of a theropod.  This is a dinosaur that stood up on two feet and was related to Tyrannosaurus rex.  I proudly shared my find with one or two people who were desperately scouring the rocks.  Happy to have helped them, I Ieft here for my final quest to Duntulm where, just as Dugald had told me, rows of round impressions from the four-footed sauropods left distinct trails on the flat bedrock exposed by the low tide.   Some were very clear, others needed my imagination, but the more I looked the more I saw.

Perhaps it was because I was alone but here I sat for a while and looked at the black rocks and towering headlands.  To think that I have trod where dinosaurs once trod is such a remarkable feeling.  Everything, it seems, leaves an imprint. I thought about time and infinity, and 170 million years ago, and felt distinctly privileged to be part of the earth’s history; especially to be here on Skye leaving footprints of my own. 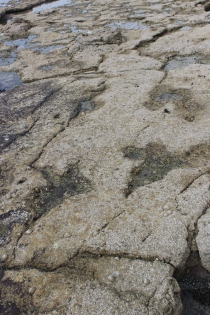 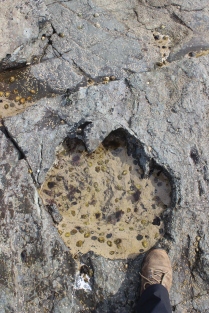 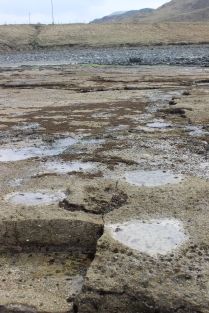